I am so excited to be going to Blogger Bash - my first ever blogging conference - in NYC next week.  It is going to be SO much fun seeing and actually talking to all the wonderful people I have met online through blogging, meeting representatives from brands I love, and just getting into the City again after a waaaay too long hiatus from visits.

Before the big event happens, all of us attendees are asked to participate in a little bit of a Q&A about ourselves.  A Coffee Talk, if you will, where we can get to know a little bit about each other.

3. How long have you been blogging? - My first ever blog post was on June 23, 2011 on my friend Jamie's blog loserpie.  The title of the post was 'First Time Out of the Box' and it explained how I didn't know what I was doing.  After 3 years of blogging, I'm sure some could argue that not much has changed.

4. What is the meaning behind your blog name? - I have two blogs 'Whatever Works' and 'What the heck's a bonbon?'.  'Whatever Works' is what I find myself saying in most everyday life situations because as I stated before, I really don't know what I'm doing most of the time.

'What the heck's a bonbon?' is my response when someone asks me if I sit around all day eating bonbons as a stay-at-home parent.  I figured that would work AOK for my recipes especially since I never have all the right ingredients.

6. What three words describe you the best? - Giggly, Tall, Mom

8. We all have a pet peeve. What is your #1? - Inconsideration of others

9. If you could have dinner with anyone, dead or alive, who would it be? - My family.  We have great conversations at the dinner table.  It's my favorite time of day. 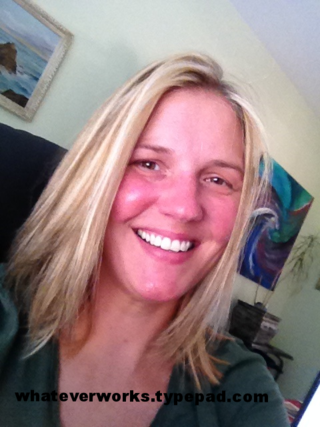 Can't wait to meet you next week at Blogger Bash!

Another great day at the Tuckerton Seaport! A review of the Privateers & Pirates Fest

This post is sponsored by Real Mom Media, but all the opinions are my own.

As usual, the Tuckerton Seaport got another huge checkmark in my book of awesomeness last weekend.  On Saturday my family & I attended their Privateers and Pirates Fest which we had been excited about since hearing of it.  My son is really into pirates, so this was absolutely perfect for him.

We even dressed the part! 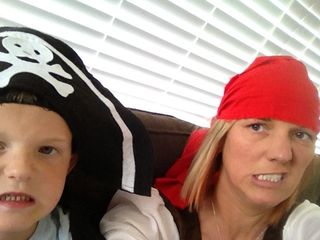 After meeting up with some of my other bloggin' buddies and getting our treasure map, we went downstairs in the Seaport's visitor center to complete some crafts.  They really went all out with aluminum foil/cardboard daggers and paper parrots for your shoulder. 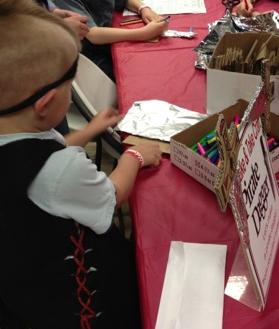 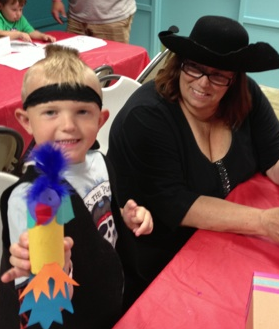 I will call him George!

I jokingly commented to the lovely woman at the parrot station that she must have been cutting out all those parrot parts for days.  She replied that it was more like weeks!

After we explored a bit more of the visitor's center which included a sealife exhibit and a real live talking parrot, we ventured outside into the world of the pirates.  My son was absolutely mesmerized. I mean, these were REAL pirates in his eyes (which were twinkling like crazy the whole day).  The first thing that caught his eye was a little plank set up for kids to walk.  He jumped right up there and got his picture taken immediately. 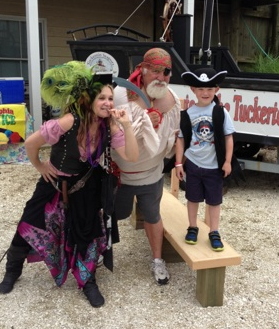 One pirate asked him if he wanted to sword fight. 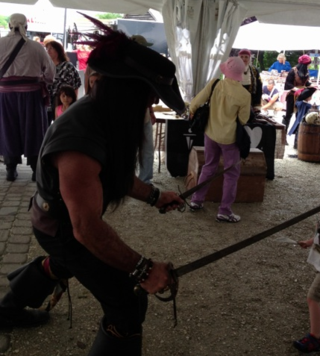 My son said no, which surprised me.  After we walked away, he advised me he didn't want to do it because his little aluminum foil dagger was not big enough...he needed a "real" sword.  It was easy enough to find one as there were vendors galore with everything pirate related.  They were very reasonably priced, I might add.  We found a $4 plastic sword and went on our way to see a cannon demonstration - always keeping our eyes out for that sword fighting pirate. 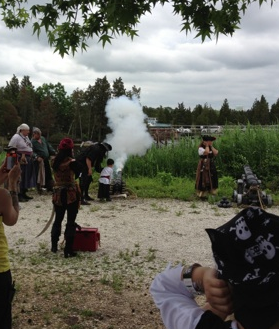 After the cannons blasted a few times, we went into the big tent to listen and watch some pirate musicians sing the songs of the sea.  A nice pirate lady with a display of assorted pirate memorabilia explained so much to my son about different types of guns and weapons, I think his head was about to explode with excitement.  He told me all about what he learned on our walk to Perrine's Boat Works to see all the sneakboxes being made.

At that point, my daughter joined us after her soccer game (which they won, woohoo!) and we took a walk over to the Tucker's Island Lighthouse.  We were greeted by a pirate at the doorway explaining some different types of trials pirates endured through the years.  We then strolled up to the top of the lighthouse for a quick pic and headed back down. 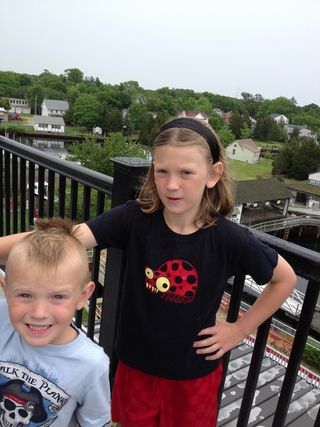 I had mentioned earlier that we received a treasure map.  That map had various locations in the Seaport listed where we were supposed to visit and get a sticker.  Once all the stickers were received, we could pick a prize from the treasure chest.  That was our last stop for the day! 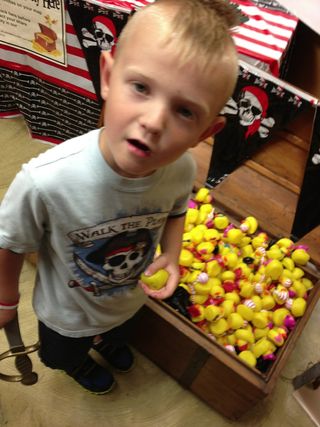 Can you guess what he chose? Give up? It was a duck.

We had a great time once again at the Tuckerton Seaport and plan to go back many times this summer for their many events.  Our favorite is the free Friday night concert series that runs throughout the summer.  We pack up our cooler, grab some glow sticks and snacks for the kids and head over for a great family evening every chance we get.

Hope to see you there! 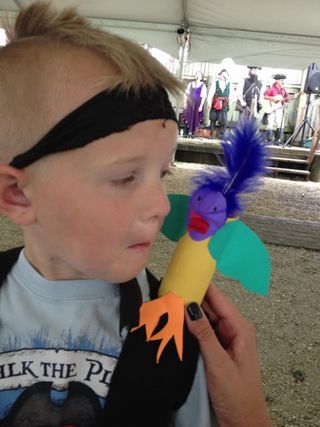 Fun times at the Tuckerton Seaport: A recap of the Bluegrass & BBQ festival

Disclosure: This is a sponsored post, but all my thoughts, opinions, and love for my day at the Tuckerton Seaport are truly my own. 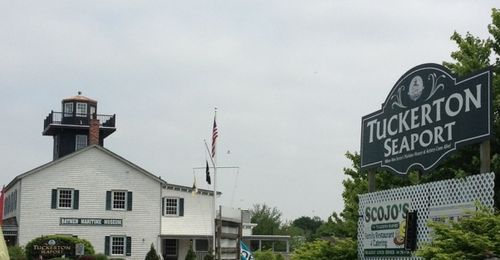 This weekend my family & I were fortunate enough to be guests of Real Mom Media at the Tuckerton Seaport's Bluegrass and BBQ Festival.  We were able to enjoy the festival with several of my blogging buddies who came in from the Philadelphia area to check out all the Tuckerton Seaport has to offer.

I have to confess something: I've been to the Tuckerton Seaport probably 30 times since they opened, but I've never actually taken a guided tour.  Because I live within walking distance, my family & I always stop in to play mini golf or play on their huge wooden pirate ship.  Sometimes we take a walk to the top of the lighthouse and see if we can see our house from way up there.  We always check out the NJ Surf Museum and brag that their Hansen 50/50 is the same make our brother-in-law surfs.

Every Friday evening in the summertime, we pack up our beach chairs and a cooler and head to the Seaport for their free Friday Night Concert events.

We love the Seaport.  But we've never actually walked with a guide. 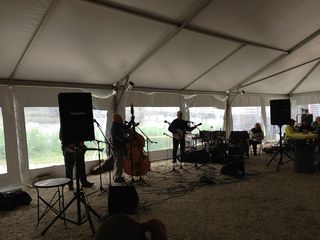 bluegrass under the tent

Between listening to awesome bluegrass music by both the staged bands and the vendors plucking cigar box banjos and eating barbeque like ribs, fried catfish, and collard greens, we were able to take a walk around the 46 acres to find out a little more about my town's history. 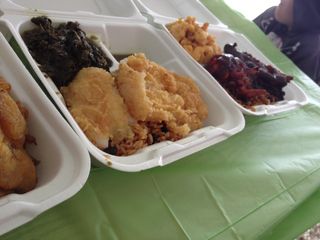 We looked at duck decoys and sneakboxes that lined the Hunting Shanty and marveled at the names underneath.  My daughter thought it was super-cool to learn that a few of her friends are related to famous award winning decoy carvers and boat builders like Rube Corliss and Gus Heinrichs. 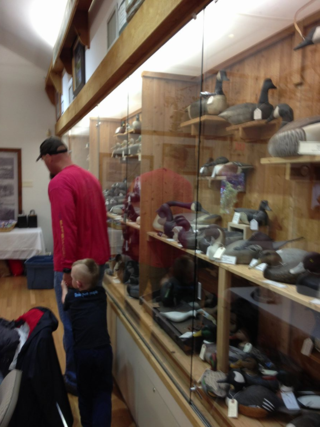 Checking out the decoys in the Hunting Shanty

We also got to play about a million different musical instruments including this awesome washboard necktie at Todd's Musical Petting Zoo which was there for the festival: 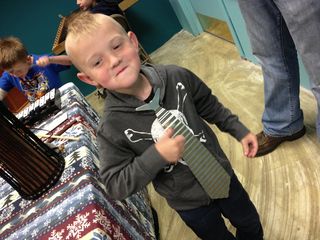 Wrote a song about it. Like ta hear it? Here it go!

I was also very happy to be there for the world premiere of Jersey Shore United a film by Jimmy Ward -a local favorite here on the Jersey Shore since Hurricane Sandy.  Jimmy has been making these fantastic videos of himself running through our shore towns after Hurricane Sandy to help show our progress in bebuilding.  But moreso they show our strength as a large community.  It warmed my heart to see him in person and to be able to tell him how great he is for doing what he does. 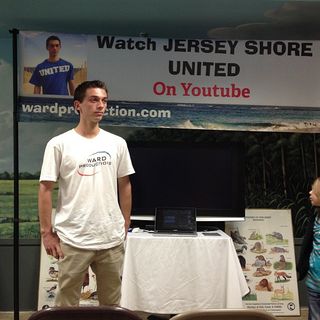 We ended our day by making a really cute wooden duck magnet which now adorns my fridge.  The kids did a great job!

Our day at the Tuckerton Seaport was so great.  The kids are eager to go back and learn more and I'm eager to attend more of their awesome festivals.  Up next: the Privateers & Pirates Festival on June 8th 2013! Looking forward to it.  Hope to see you there!