My Reserve, Our Coasts: Save Our Local Resource - the JCNERR

I don't get political too often and there is good reason for it.  I don't follow politics.  I am not well versed in them.  With the way the world is now, I don't WANT to know them either, quite frankly.  What I DO know is that when something that is good for my family, the community, my friends, and the world is threatened, I will fight  for it.

Right now, the funding for our coastal reserves is in danger due to budget cuts within several federal agencies including the Environmental Protection Agency (EPA).  Our local reserve the Jacques Cousteau National Estuarine Research Reserve (JCNERR) - where our children learn about our area - could be shut down.  In fact, without our help, it could be gone as early as 2018. That means research will stop.  Jobs will be lost.  Our children will lose the most convenient environmental resource available to them.

You probably don't realize how much you have used the JCNERR.  If you'e ever visited the Tuckerton Seaport's third floor, you should know that all that great hands-on equipment is there because of the JCNERR.  If you've ever taken a class at the Field Station, that's run by the JCNERR.

I asked around to see how many of my local friends have utilized the resources at the JCNERR  and was so pleased to learn that SO many have taken their classes with rave reviews:

"They have great programs there, all three of my kids have been involved over the years. What a unique opportunity to learn about our local environment! Losing funding and those programs would cheat the coming generations." - Vicki Falkinburg
"I took my boys when they were little. Loved it. Austin dissected a squid when he was 7. The "build a water robot class" was amazing. We also made a birdhouse that we still use.  We went seining one day too." -Kate Janney 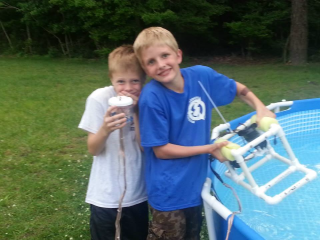 Austin and Ryan Janney with their underwater robot
"I took the boys there twice. We had a great time! The staff was super informative and so nice! The boys loved it. They did the underwater robot and the penguin visit."- Samantha Colandrea
"We went one summer and it was great. I was hoping to do one this summer for Hope. She wants to be a scientist when she grows up and loves these types programs."- Jessica Shertenlieb
"The kids really enjoyed all of the hands on experiences."- Maureen Tyhanic
"Stephen (grandson) attended the summer classes since he was in first grade until he was too old to attend. Big classes full of children learned a lot each summer."- Joan Neuroth 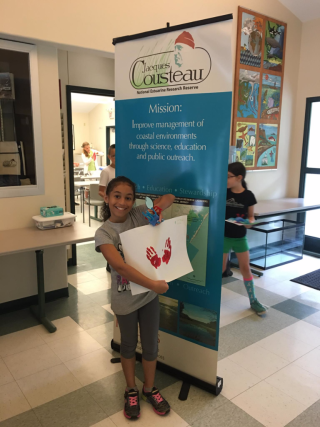 Leanora Earle after a great class at the JCNERR

If you have a great experience with the JCNERR. please tell everyone about it! You can comment on this post, or share it on social media using hashtag #MyReserveOurCoast.

PLEASE read the article in the Sandpaper for more information. http://thesandpaper.villagesoup.com/p/area-environmental-groups-fear-possible-federal-budget-cuts/1639182

I know I'm not doing much justice to how important saving this program is for our future.

Find out what else you can do to save your local reserve by checking out http://www.nerra.org/my-reserve-our-coasts .  Use the hashtag #myreserveourcoasts whenever you're taking pics at the beach or visiting your local reserve!

The best thing is to get the word out that WE LOVE OUR RESERVE, OUR COASTS!  Share this article, share your experience, call your local representatives, do whatever you can.

My family and I were very happy to be a part of the Jersey Mom's media event at the Liberty Science Center recently.  We were invited to see everything first hand so we could bring back the information to you in case you were thinking of visiting over spring break!  (Spoiler alert: We think you should.)

I haven't been to the Liberty Science Center since I was a kid and was excited to see all the changes.  And yet, I was very glad to see that the main focus of teaching while having fun still remained. 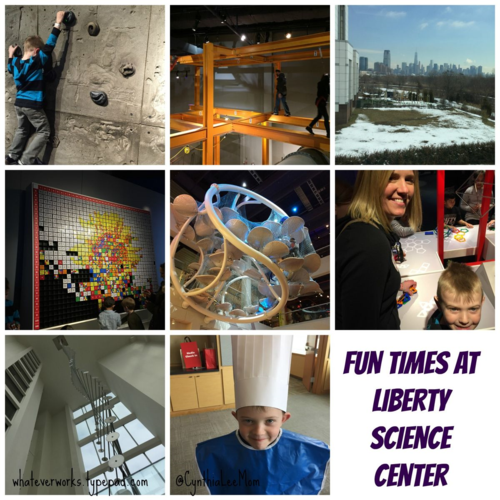 Here's a list of the Top Ten reasons we loved Liberty Science Center:

And as a little incentive to get you there, I was also given a set of 4 tickets to giveaway!  All you have to do to enter is complete the tasks in the Rafflecopter form below!

Don't forget to visit Liberty Science Center on all their social media channels:

This post falls under the category of Weird Stuff I Do. It's about oil pulling. 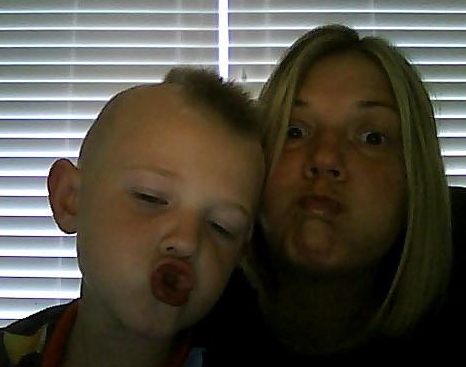 I have always had sinus problems and never had any problem taking medication to treat them.  However, as we all know most sinus medications are not recommended when you are pregnant.

So when I got all knocked up with my daughter, my sinuses started laughing at me.  Sinuses are jerks.

I looked everywhere for a good homeopathic remedy that could relieve my sinus pain and pressure and not cause my baby to come out resembling a Mucinex bottle or something.  Among other remedies like eating whole garlic cloves and doing shots of apple cider vinegar, I found the ancient Ayurveda practice of oil pulling.

When I read about it, I thought it was so silly it HAD to work.  Guess what?  It did.  After the first few days of oil pulling, I was blowing things out of my nose I never knew could fit in there.  But it did so much more than just that.

See, you are supposed to do your oil pulling first thing in the morning before you eat or drink anything.  I'm not sure on the science of that aspect (or the science of ANY of it, to be honest) but the process goes beyond science for me.  Those first 15 minutes of the day are the calmest of the entire day.

My kids wake up and see me swishing, so they go about their business without asking me for anything.  If they do need something, we find creative ways to communicate with each other while I can't speak.  Today, my son and I had a great silent conversation about tea and his fluffy blanket using just our eyes and a sort of sign language.

I've been oil pulling for almost 10 years now.  I don't know if it has really helped me physically or if it's just in my head.  Maybe a little of both?  But I do know that it helps start my day off on the right foot most of the time.  Just thought I'd share it with you.

*I recently switched over to coconut oil because I heard it gives some energizing effects.  Boy, does it!  It's better than the first cup of tea in the morning.  Honest!