Snippets of the past few years

I was just going through to see if I had any old, unpublished posts on here that I could work on finishing today.  As it turns out, I don't think I want to finish any of them.  And I don't want to leave them sitting there all alone by themselves in the blogging abyss either.  So, here are the snippets of unfinished posts for you to enjoy.  Or delete.  Or whatever.  They are all related and unrelated at the same time.

We've been celebrating my daughter's birthday for about 4 days now.  No reason.  It's not a "special" birthday or anything.  No milestones to report.  No fantastic news attached with it.  It's just the birthday that never seems to end.  It started with the mandatory school cupcakes.  Then birthday dinner.  After that was the kid party that night.  Then came the family visit with presents and cakes and fun galore.  We were afforded a small break in between events that some like to call "sleep", but for me it was more like "lay in bed and figure out how to dye a Pringle orange so it matches the bill of Perry the Platypus so I could use it on yet another cake."  It was all one big run-on sentence.

Contrary to popular belief, I love animals.  I think bunnies are the cutest things alive.  I won't intentionally kill an insect unless it's biting me or someone close to me.  We have bird feeders outside that I love to look at during the cardinals' feeding times.  I love animals just as much as I love people.  That's the main reason I don't want a pet.

I've had pets before...bunnies, guinea pigs, fish, parakeets.  They were all hard work, and I loved them.  I was so sad when they all passed away.  They were all members of my family.  It was heartbreaking to watch each and every one of them fall asleep and never wake up.  Having a pet is the same to me as having another child.

I wonder if my parenting instincts are right.  Every once in a while, I catch a glimpse of what I think my kids will look like as teenagers or even adults.  I also envision them acting in certain ways when they're older.  I wonder how much of it will come true.

My daughter currently is much deeper into her emotional side than I thought 8 year olds could be. My son is a wack-a-do.  He's only 3, so he's got time.

When I first started blogging, I thought I may have finally found a great avenue for my brain spillage.  I could write down some of my thoughts to see if anyone else shared similar ones with me.  I had no idea it could possibly lead to everything it has so far.

Over the past year and a half, blogging has given me something much more than just an outlet for my innermost thoughts.

I try my best to stay away from the news.  I know, I know... I'm supposed to stay abreast of wordly things and know what's going on around me.  But do I, really?  Lately the news has gotten so bad that my head hurts constantly.  I don't sleep and when I do I wake up with a large crease between my eyebrows from apparently horrific dreams.

I've decided to focus more on that  "around me" bit.  There are so many things going on around me in a MUCH closer vacinity that I should concern myself with.  Bye bye news.

I've been talking with God a lot lately.  As everyone who watches the news knows, we had a terrible storm here almost two weeks ago that ripped apart a lot of shore towns, left northern town without power- some who still don't have it- and just shocked everyone.  Shocked.  Numb.  Sad.

I rush around like an ant trying to help rebuild my community one little grain of sand at a time.  Everyone acts the same. We all go right to work.  No one is slacking.  Yes, there are some unscrupulous people trying to take advantage of the situation by selling back donated items to stores and taking too many pillows, but they are few.  The majority just want their homes back to normal.

I feel guilty for having a bubble placed around me.  No damage.  No nothing.  My children are safe.  I can still go get my hair done and go about my life the way I normally have in the past.  But I can't.  Someone told me the term is "survivor's remorse".  I like that better than guilt.  I'm not guilty of anything... I'm just feeling remorseful.

Every time I sit down to write here, I think of an episode of House I watched a long time ago.  Laura Prepon played a blogger back when blogging was sort of new-ish.  Her blog was basically a public daily journal that had many followers.  She wrote in it religiously which made her husband (boyfriend?  I don't remember) question her actions.  Why did she feel that she had a connection with people she didn't even know in real life?  Why did she write there so much?

I think I figured it out.

Today I can't shake the feeling that something is wrong.  Who? Where?  What?  I don't know.  But my gut is telling me something needs to change.

I have been inside the past three days writing my face off...trying to meet deadlines...trying to get everything done.  Am I missing something out there?

I have always had a very hard time buying or owning items that do not have more than one purpose.  One of the two (or more) purposes of each item has to be one that is actually physically useful.  The next requirement is that the item makes me happy.  Anything else is gravy.

So some of the normal things that happen in life don't come as easily for me.  Everything I do has some sort of purpose.  In some cases, that purpose may only be known to me and it may seem strange to outsiders looking in.  And that purpose might not be relavent in the grand scheme of life, but it is important to me at the time.

So that's it.  That's all my unfinished thoughts over the past few years.  I don't have as many answers as I wish I did.  But sometimes just getting those thoughts out of my head and into the world help get me on my way.  Thank you to anyone who read this post.  I really appreciate it. 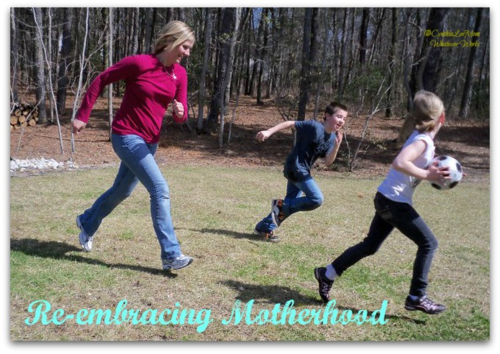 One of the things I've learned while dabbling in the social media field is that people like to read statisics.  Well, here's one for ya: I've been a mom for more than 1/4 of my entire life.

For the past 10 of my 39 years here on this earth, I've spent a lot of time changing diapers, fixing lunches, arguing the importance of completing the before school ritual before playing video games, making beds -ok, not really so much on the "making beds" part because I do hold to that theory that Hey, you're just going to get back in it in a couple hours so why make it, BUT I digress...

Out of those 10 years minus time spent completing all the motherly tasks and sometimes sleeping, I think I have spent the majority of my time playing with my kids.  After about year 8, I got tired of it.

Yes, you read that right.  I didn't want to play anymore.

I got tired of Candyland.  I didn't want to make forts.  I completely stopped enjoying the swingset.

I just wanted to sit back and observe.

Then one day I heard myself say that out loud.  And it sounded so incredibly horrible that I wanted to jump out a window.  I felt like Mommie Dearest.  What was wrong with me?  Why couldn't I just play?

All I could think of was the term Seven Year Itch, but in my case it was about motherhood.  At the same time my kids craved my attention, I craved to go off to foreign lands...like any store other than Target, Justice or Five Below.  My kids wanted another teammate for a pick up game of tag, and I wanted to sit in the sun.  I wanted quiet.

Was I becoming a horrible person?  Was I really done with all the fun of motherhood?  Did I give up on my kids?

No.  To all of that self-depricating bullshit...  Just no.

When I was playing all the time and not enjoying it, I was feeling down on myself.  I wasn't really playing; I was fake playing.  And how is that good for anyone?  The kids might have an extra body to complete their basketball team, but that's it.  I wasn't teaching them anything.  I wasn't smiling.  I was actually quite childish when I forced myself into their games.  I'm not proud of it by any means.

I felt very selfish about wanting to be alone for a while.  But I realize that I must have needed it.  In some way, God was telling me to step back and reevaluate the situation.

So I said no when my kids asked me to race them in MarioKart.  I declined their invitation to a dance party.  I chose to talk with my friend on the bench instead of climbing the equipment at the playground.

I needed to show my kids that I am a person outside of being Mom.  They needed to see me doing things that I like.   And to be honest, I needed to remind myself what activities and things I actually do like!

As weird as it may sound, it made me feel strong again. Once I re-embraced my own self, I was able to re-embrace motherhood, too.  Now I feel like I can do anything.

...Even play a game of Monopoly all the way through.