And the mom was happy.

While I was brushing my teeth Friday evening, my son who is 5 years-old came up to me with a book in his arms. "Mom, we never read this one!  Can we read it tonight?"

I looked at the familiar green cover and couldn't believe I had never read The Giving Tree to him before.  My daughter and I had read it about a trillion times in her 10 years, but my son had been depraved up until then.  "Of course we can read it."

I was excited for bedtime now.  So once we were all jammied up and snuggled in his bed, I looked at his little face and glanced at his little stuffed llama (Llama Jamma) that he held loosely in his arms.  My son had those bright anticipating eyes he always gets when a new book is about to be read.

So I started reading.

As I turned each page, I noticed little tiny sighs coming from my son's mouth.  I heard his breathing change slightly and felt him slinking just the eansiest bit into his pillow.  When the boy cut off the tree's branches to make a house, I could feel my son's arms hold tighter onto Llama Jamma.  And when the boy walked off to make a boat out of the tree's trunk, my son put his hands over his eyes.

I thought stopping then would make it worse, so I read until the end.

'And the tree was happy.'

He took his hands off his eyes, but then buried his face in his pillow and cried like I never heard him cry before.  When I tried to ask him what was wrong, he buried in deeper.  After 5 full minutes of his inconsolable sadness, he emerged again and didn't want to talk about it.  I obliged and offered to read something else... something funny.  Something to take his mind off the one book that made my beautiful child cry so.  We read another book and he went to sleep as fine as he would be any other night.

I went downstairs and cried myself.

See, I had never read The Giving Tree myself until I was a mom.  To me, that book signifies everything wonderful about motherhood.  How we would give everything for our children - even when there is nothing left to give.  And we are happy to do it.  The only thing we ever want in return is to be loved.

But maybe as a child, the book isn't as beautiful as I want it to be.  To a child, it puts all that giving into a different perspective.  It makes it seems wrong to ask for things because when you take too much, you are leaving behind branchless trunks and small stumps of the people you take from.

But after I stopped crying myself, my son's sadness about the book made me strangely happy.  Before you think of me as a rotten mom who smiles at the thought of her crying son, let me explain by telling the rest of the story:

The next morning, I assumed all was forgotten about the Giving Tree.  I had hidden the book in the far reaches of his bookcase and swore to myself I would never read it to him again unless he asked.  Well, he came came downstairs and said, "Mom, can we please read that book again?  The one with the tree and the boy?"

I asked him if he was sure, because I knew it made him so sad the night before.

So we read it again.  This time, we stopped at every page and he asked me why the boy would eat all the apples.  Why would he cut down all those branches?  Why would he take her whole trunk?  Why did he keep leaving?

Using his own little brain, he personified the tree.  He made the tree into a woman - a mother.  He turned the book into a story about me and him.  He figured out for himself that it is a true testament to my love for him.  That I would give him everything, even when there is nothing left.

This time after the book was finished, my son was happy.  He looked at me differently.  I know it's silly and probably not true, but I felt his gears click into place.  I felt like he understood.  I am here for him and always will be.  Even when I'm old and stumpy.

But more-so, I think he understood that asking for things comes with a price for him as well.  Yes, he can ask and I will give.  Yes, I would cut off my arms if he needed me to.  I would.  But he knows that I am a person, too, and that always asking may leave me with less for myself.

As a mom, it is often hard to admit that premise even to myself.  I don't ever want my children to think they can't ask me for something.  But on the same note, if they can do it themselves, they should.  That IS what we are prepping them for, isn't it?  Independence?

I think that book gave my son his first glimpse at what independence means.

The other night I was trying to figure out a good way to use up some frozen cod we had in the freezer.  The weather was nice, so grilling was on the forefront of my brain.  I wanted something that had a grilled flavor, but still sort of resembled a basic fish fry.  I checked the cabinets for some crunchy stuff I could smash up to make a nice coating on the fish.  I found almonds, saltines and flax seeds.  Perfect!

Here is what I came up with: 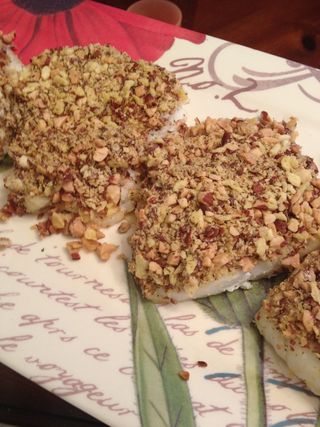 Coat the cod with 4 Tbsp melted butter on both sides and place on one sheet of aluminum foil.  Place on indirect heat on a low grill for about 10 minutes.

While it is cooking, whirl up the saltines, almonds, garlic, flax seeds and parsley in your food processor until the mixture looks like coarse bread crumbs.

Take the fish off the grill (leave on aluminum foil) and place the whole thing on a large plate.  Divide the almond mixture in four and top each piece of cod with it.  Drizzle the tsp of melted butter over the fish and put the whole thing back on the grill for about 10 more minutes or until the fish is flaky and the topping is slightly browned.

My husband loved it.  My daughter liked it with a little lemon on it.  I absolutely loved it and really sort of made an ass out of myself declaring my love for it at the dinner table.  My family now thinks I'm insane.  ...Hope you like it!