One of the awesome perks of working in social media is that I am often given the opportunity to try new things and write reviews about them.  Sometimes, I am even afforded the luxury of offering a giveaway to you all.  I am happy to report that today is one of those awesome days!

The other day I received this gorgeous package in the mail from Rose Romano's: 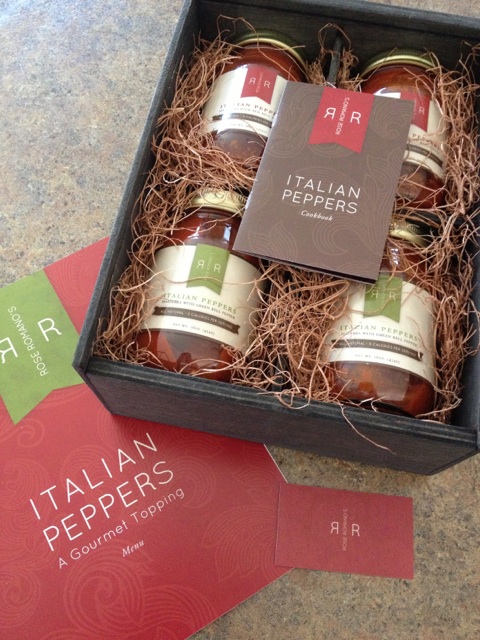 I was so excited to open it and give the topping a try.  Unlike typical pasta sauces, Rose Romano's is more of a topping to be used as an enhancement to your meal.  You don't need to pour a whole jar on your dish to make it taste good.  A few spoonfuls is all your need to make any dish delicious.  There are both red and green pepper varieties - all locally-sourced, gluten-free and low calorie.

I'll tell you, I've been putting it on EVERYthing since opening the first jar.  Omelets, sausage & pepper sandwiches... so far my favorite has been using it to make this Italian hot dog (recipe below): 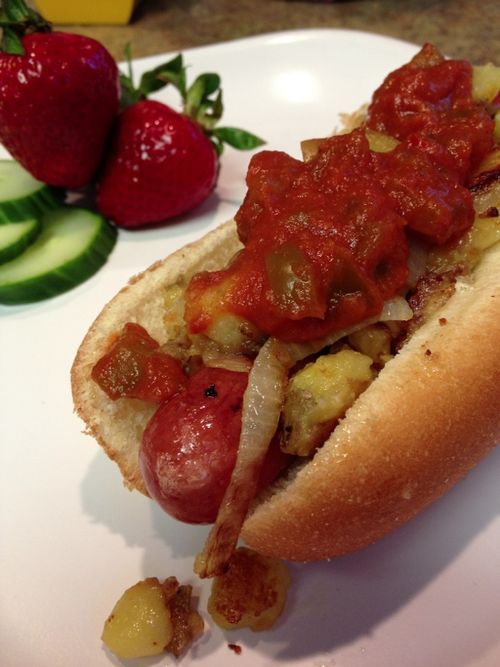 8 of your favorite hot dogs

Place potatoes and water in pan on high heat.  Bring to a boil, reduce heat to medium and cover for about 5 minutes or until potatoes are almost cooked through.  Drain any excess water.  Add butter & oil, garlic powder, salt & pepper.  Cook a few minutes over medium heat and then add sliced onions.  Cook until potatoes get crispy and onions are slightly brown.

Grill hot dogs to the desired doneness and assemble them on a plate.  Put a hot dog in each bun.  Add a spoonful of the potato onion mixture and a dollop of Rose Romano's Italian Peppers on top.  Delicious! (Serves four- 2 hot dogs apiece)

And don't worry...if you don't win you can still order Rose Romano's online at roseromanos.com or through their Facebook Page: Rose Romano's .  You can also find Rose Romano's at a few Whole Foods locations.  Keep an eye out for them!

Best of luck! Hope you win.

Until last year right around this time, I knew nothing about preeclampsia.  Sure, when I was pregnant, the doctors talked about it.  But since I was not diagnosed with it I let the information go in one ear and out the other.  There were too many other thing I needed to think about before becoming a new mother.  One of my friends went through it right after my daughter was born and I regrettably still did not fully understand the magnitude of it all.  She and her newborn daughter were in the hospital suffering from a life threatening problem, and I still did not understand.

Then I met Sarah Hughes...

Sarah and my husband went to college together.  The magic of Facebook made us friends.  Sarah is an advocate for the Preeclampsia Foundation and the coordinator of the Philadelphia Promise Walk for Preeclampsia.  She became fully aware of preeclampsia and its horrors after the birth of her daughter Hayley.  She shares her story here: 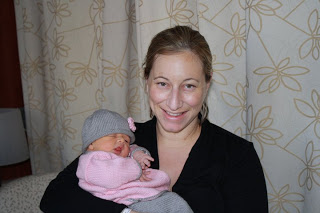 Sarah and her daughter Hayley

We mothers are so used to be the nurturers and caregivers that very often we make light of what we are feeling in order to continue on with the routine.  So when I woke up 6 days after my c-section unable to catch my breath, with blurry vision and a dull headache I thought I was just tired. I had a newborn and a toddler, I didn’t have time to think something was wrong with me or what I could do to fix it, but my husband Rob insisted I call my OBGYN.

Hayley was my second baby.  She arrived full term via scheduled c-section on October 25th.  Our little princess had arrived and even my son Derek, at just 26 months old, was thrilled for our family.  I was released from the hospital and spent two days in that post baby honeymoon phase. When I agreed to called my OBGYN I was surprised at the stern immediacy in her voice when she insisted I get to the hospital right away. 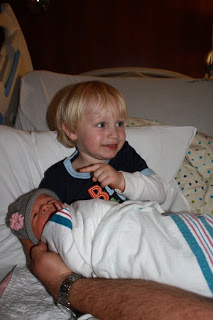 My in-laws rushed over and I kissed my babies good-bye trying to be strong but unable to hold back the tears. Derek was going to be a fireman for Halloween that day, plus my brand new Hayley Jane, I needed to be home and dress Hayley in pink and cuddle her…would she forget me? Would we never bond? I didn’t realize then that it would be 3 hellish days till I saw them again.

Preeclampsia.  I heard the word, I knew it had to do with pregnancy and headaches and blood pressure (mine was 220/110)……but I wasn’t pregnant!!!!  There I was, a mother of two, about to be hooked up to a Magnesium IV so I wouldn’t have a seizure or stroke due to preeclampsia and I had NEVER even heard of having preeclampsia postpartum!

A very sweet nurse sat down next to me and grabbed my hand firmly. She asked me to tell her what I was thinking.  I told her, “I’m scared, I just want to be home with my babies and I’m nervous what will happen to me and I’m afraid that I might die”.  That was the honest truth, I was petrified that I would seize and die.

The first night I was on the magnesium I saw 5 of everything. I had to wear an oxygen tube because my oxygen saturation levels kept dropping so low that every time I would drift into sleep I would wake up gasping for my breath. I was pumping every two hours, unable to get out of bed and hooked up to a catheter.

I felt so sick, oh so sick. The magnesium makes you so so so sickly feeling.  After I came off the Magnesium I felt “better”. My blood pressure was still high but low enough that I could go home eventually.

It took a few weeks for my BP and me to get back to normal. I feel so lucky that my preeclampsia story only involves me and that Hayley was unharmed by it all.  Most people aren’t so lucky since Preeclampsia is the leading known cause of prematurity.

Thousands of women and babies die or get very sick each year from this dangerous condition called preeclampsia, a life-threatening disorder that occurs only during pregnancy and the postpartum period. Affecting at least 5-8% of all pregnancies, preeclampsia and related disorders such as HELLP syndrome and eclampsia are most often characterized by the presence of protein in the urine and a rapid rise in blood pressure that can lead to seizure, stroke, multiple organ failure and death of the mother and/or baby. Swelling, sudden weight gain, headaches and changes in vision are important symptoms; however, some women with rapidly advancing disease report few symptoms.

In the 5-15 years after having had preeclampsia I am now twice as likely to develop heart disease. According to the Preeclampsia Foundation there are an estimated 4.5M US women alive today who are at risk to die from Cardio Vascular Disease or stroke because of their preeclampsia history.  Both Hayley and Derek’s future wife are at a higher risk for developing preeclampsia because yes it is hereditary.  I have hope that one day we will find a cause and a cure for preeclampsia.  I will forever be trying to help in the education of preeclampsia and raise money for The Preeclampsia Foundation.  I am the volunteer walk coordinator for the Promise Walk for Preeclampsia Philadelphia/South Jersey.  May is officially Preeclampsia Awareness Month.  Won’t you join our walk on Saturday, May 11th, 2013 at Challenge Grove Park in Cherry Hill, New Jersey.  We walk on Mother’s Day Weekend to celebrate Mothers and Babies!! If you aren’t local to the Philadelphia area you can find a walk closer to you at www.promisewalk.org We can’t do it alone!

We walked with Sarah last year and will be there again this year.  It is a really fun event that helps raise money - but better yet it helps bring preeclampsia survivors, friends and family together in a bright sunny light.  I hope you will join us. 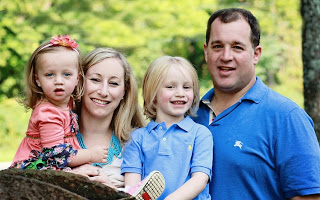 About Sarah Hughes…I grew up in Staten Island, New York.  When I escaped working in New York City for a new life in Philadelphia I started dating my now husband Rob. We have two children, Derek is 4 and Hayley is 2. Finnegan is our 5 year old Australian Shepherd and really more like a third child than a dog. All of our children love to sleep in our bed!! I am a Shot@Life Champion and a Preeclampsia Foundation Walk Coordinator.  I blog over at www.finneganandthehughes.com