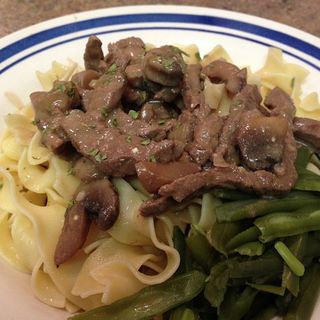 I love to make concoctions for dinner.  I call them real names, but I don't know if they are technically the correct names for what I make.  For example, tonight I made beef stroganoff.  The only thing I know for sure regarding the right to use that name is that I used beef.  So at least I'm half right.  And since the word stroganoff is so funny, I might even use it more often.  We might end up with chicken stroganoff, veal stroganoff, cupcake stroganoff.  The possibilities are endless.

Here's the recipe.  You can call it what you want, but I call it:

Put the beef in a large bowl and toss with the apple cider vinegar, Worcestershire sauce, salt and pepper and let it sit for about 20 minutes.  Put about a Tbsp of butter in a deep pan and add the garlic.  Brown the meat on medium/high in the garlic butter in batches, taking it out and keeping it warm in a separate plate.  Once all the meat is done and out of the pan, lower the heat to medium and add another Tbsp of butter and the onion.  Cook the onion for about 1 minute and add the mushrooms.  Saute for about 2-3 minutes until you can start to smell the mushrooms.

Add the beef back to the pan along with the bouillon and water or stock.  Vigorously stir the flour, nutmeg  and cold water in a cup to make a thickening agent.  Stir the mixture into the pan and let the whole thing cook covered on med/low for about 45 minutes. Stir occasionally.

When the 45 minutes are up, turn off the heat and whisk in the sour cream a little at a time.  You may not need all of it if your sauce is thick enough already.  Sprinkle some parsley on top.

I like to serve this stroganoff  with buttered egg noodles and some French cut green beans (if that IS their real name.)

*Don't buy top round already cut up this way.  Buy a top round roast and do it yourself.  It will be MUCH cheaper and it's the same exact meat.  Trust me.  I worked for a butcher for 6 years.  I know my meat, people.

**Also buy your mushrooms whole and cut them up yourself.  They just taste better that way.

Hey Locals! Who loves Cake That as much as I do? Let's find out... {Giveaway} 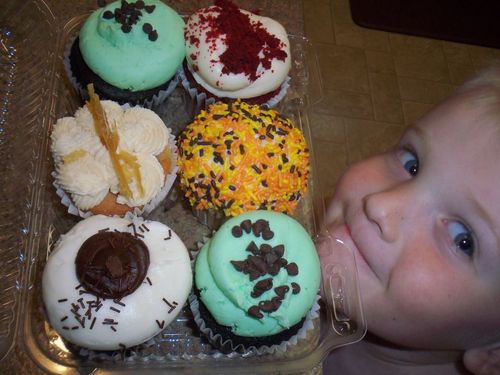 If you haven't heard yet, Jess Bartlett from Cake That is going to be on Cupcake Wars on the Food Network March 3rd.  Woohoo!  I'm so excited to watch the episode for many reasons including the following:

2. Battles involving food AND people I know make me even happier.

3. I think Jess is one of the coolest people I've ever met and she deserves the best.

4. She makes the best cupcakes in the universe. (OK, I haven't tried any extraterrestrial cupcakes, but I'm going to go ahead and assume...)

I will bet that there are many, many more of you out there that love Cake That as much as I do.

In fact, I want to find out who loves Cake That the MOST.

Jess has very graciously given me a $25 Cake That  gift card to give to one of you lucky readers.  All you have to do is watch her episode of Cupcake Wars on March 3rd on the Food Network and answer this one question:  What color shirt does Jess wear throughout the show?

Give the correct answer in the comments section below and you will be entered to win the card and all its wonderment.  You can get a bonus entry by leaving an additional comment with your favorite Cake That cupcake flavor.  I will pick a winner on March 9th.

In the meantime, stop by Cake That in Manahawkin and get yourself some cupcakes.  Don't forget to bring me some!  Come to think of it, bonus entries for that, too!  If those cupcakes happen to be Salted Caramel, well then you get FIVE bonus entries.

There is nothing good about 3:AM anymore

When I was younger, I was a night owl.  Being awake at 3:AM meant the party was still going on or there was a great movie being watched.  It meant weird, crazy snacks and giggles.  It meant late night talks with friends and boys and being a little sleepy was cute on the phone.  It meant I was young.  It meant I could do ANYthing.

Now being awake at 3:AM is just bad news.  Now it means a sick kid or insomnia or that the heat isn't kicking on.  It means a snoring spouse or an insistent bladder or a thought that just couldn't let you close your eyes anymore.

Now 3:AM phone calls are the most dreaded thing in the universe.  A 3:AM phone call means something bad most likely happened.  Because no one in their right mind would call a parent at 3:AM to chat about last night's episode of American Idol or find out what she's wearing the next day to work.  There is nothing cute about being sleepy anymore.  Now it's just not allowed.

I now prefer the light of day.  Where there are no blurred lines.  Where everything can be seen clearly.  Kids' smiling faces... fully awake thought patterns...dinner plans...homework at the kitchen table...

Who are the Nuclear Cowboyz? Win some tickets and find out! 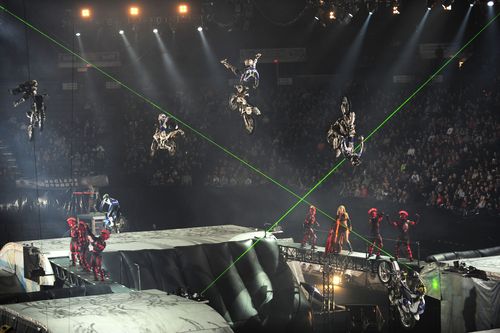 Have you ever watched freestyle motocross on the X Games?  To me, the X Games are like watching all the stuff your mom always told you not to do because it is so super dangerous.  It feels almost sneaky and taboo to flip on the TV and see these guys flying through the air on dirtbikes.  It makes you turn your head for a second to see if Mom is going to yell at you.

Well, the Nuclear Cowboyz are like the X Games times a million.  Not only are the same guys who you know and love from the X Games right there in front of you- flipping around and doing stunts you never thought possible- they are performing a very well-choreographed show with an actual storyline, costumes and pyrotechnics. My family and I went to see the show last year.  We have honestly been waiting on the edges of our seats for the Cowboyz to come around again because the show was THAT good.

Here's an excerpt from this year's press release:

Nuclear Cowboyz®, the only high octane-fueled freestyle motocross touring production in North America, is coming to IZOD Center in East Rutherford, N.J. on March 16-17. The action-packed narrative is the legend of two powerful freestyle motocross tribes whose survival in their futuristic world is told through an amassed compilation of fearless freestyle aerial feats, gravity-defying stunts, and electrifying pyrotechnic and laser displays synchronized to an energizing soundtrack.

Sound like fun?  Well, here is a little more to sweeten the pot for you:

I was given TWO (yes, two) family 4-packs of tickets to give away for this year's show and I want YOU to have them!

All I need you to do is enter to win.  I will be choosing two winners at the end of the giveaway and will contact you to let you know you've won.  I've set up this nifty Rafflecopter form for you to use.  You can enter as many ways as you'd like, but you MUST complete the task in order for your entry to count.  For example: if you enter by choosing to leave a blog post comment, you have to actually leave a comment on this post.

Hey, even if you don't win you can still get tickets for your family through Ticketmaster.  If you are feeling really saucy, go for the VIP Fallout Zone passes (Saturday only) which will get you in the same room as the riders before the show for autographs and photo ops.  It's a great time for everyone!

Disclosure: I was given tickets to see the Nuclear Cowboyz.  All opinions are my own.  They really, really DO rock.

Congrats to Paola D and Linda M for winning 4 tickets to see the Harlem Globetrotters at Prudential Center and the IZOD Center! Thank you to everyone who participated. More exciting giveaways to come!

Remember that awesome giveaway for the Harlem Globetrotters tickets you all entered last week?

You thought it was over, didn't you? 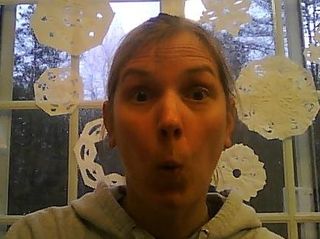 As an added bonus, the awesome people at Prudential Center have added a SECOND 4 Pack of Tickets to see the Harlem Globetrotters, but this time it will be for the 7PM Friday February 15th show at the IZOD Center!

I will be choosing a second winner shortly from the rafflecopter form you already filled out.  Stay tuned!!!