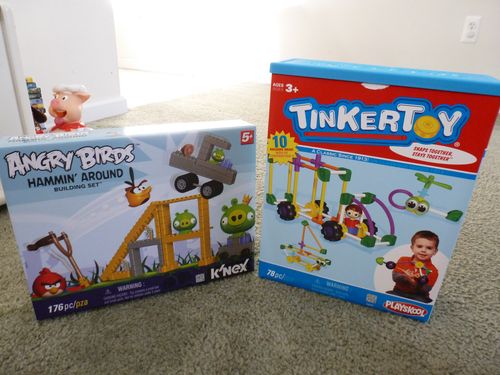 The other day was like Christmas in our house.  A big beautiful package from K'NEX arrived and my kids were overjoyed.  They ripped it open to find a Tinker Toys Vehicle Building Set and an Angry Birds Hammin' Around Building Set.  Perfect!

We all fell in love with K'NEX a long time ago, but the clincher was when we went to Monster Jam and saw the K'NEX full scale version of the Grave Digger sitting there.  If you haven't seen it, here it is! 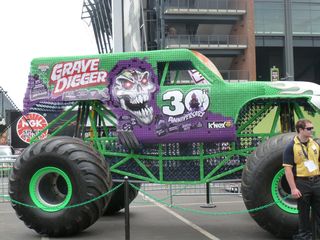 The toys they sent us to check out did not disappoint.  My kids played for hours- yes, hours. That's pretty good because I'm lucky if my kids play for minutes sometimes.  My 4 year-old son must have built 52 things.  His imagination was roaming all over the place.  He made everything suggested on the easy to follow instructions and then went off on his own making helicopters, aliens and interesting three wheeled cars that constantly spin. Here are some pictures of his accomplishments: 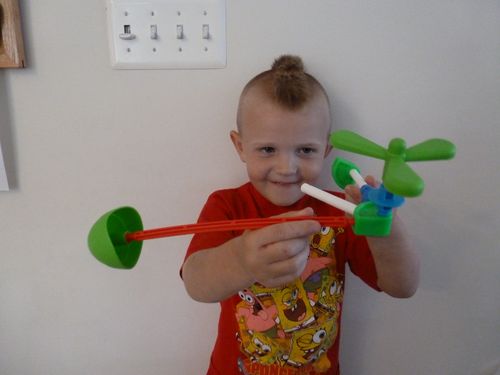 My 8 year-old daughter had no problem setting up the Angry Birds set with a little help from me.  It was a great project to work on together because we could help each other equally.  The instructions were very easy and the pieces fit nicely.  When we were done, my daughter's sense of accomplishment was overwhelming.  The set is made just like the Angry Birds game you are used to playing on your iPhone.  You are supposed to set it up and use the included slingshot to fling birds at it.  My daughter was too proud of her work to knock it down.  Instead, she flung the birds at her brother's creations.  He was OK with that. 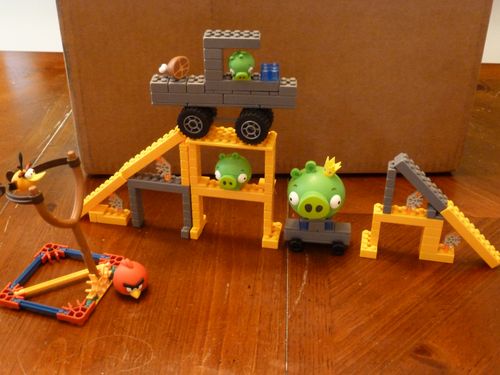 Both sets appealed to my kids for different reasons.  I asked them both what their favorite parts of their toys are and both responded with, "Building them!"

I love the fact that the toys sparked some creativity that sometimes gets lost these days.  I could see my kids' eyes sparkle when they came up with a new creations.  Every day since we received the toys, they have been playing with them.  Also, my daughter finally did destroy her Angry Birds set-up.  Of course she built it right back up again, and the second time was even easier.

Both of these toys fit my kids' personalities perfectly.  My kids are always trying to figure out the inner workings of things.  It's not uncommon to find things completely taken apart in my son's room because he wanted to see how they work.  My daughter constantly asks questions about the mechanics of everything.  With these K'NEX toys, they are able to make their own versions of toys and then explain to us how they did it.

K'NEX is celebrating their 20th anniversary this year and would love to share their happiness with you!  Not only are they giving away plenty of prizes on their website, but I am hosting a giveaway of the awesome Tinker Toys set right here!  If you win, K'NEX will send you your own version of the Tinker Toys Vehicle Building Set that my son loves so much.  Best of luck and most importantly HAVE FUN!

*Disclosure: I was given these toys to review by K'NEX and loved them.  I would not write anything I didn't truly feel about any product no matter what. :-) 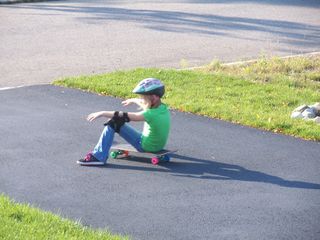 My daughter has seriously been bitten by the skateboarding bug.  For her birthday last year we got her a Dyrdek board with little doves all over it.  She started by sitting down and traveling down the driveway.  Then she saw her friend skating for real and could NOT let him show her up.  Since that day, she's been a fiend.

I recently had the fortunate experience of catching up with YuLin Olliver at Street League Skateboarding.  This was extremely cool to my daughter, because the founder of Street League is none other than Rob Dyrdek - the one and only skater who (Gasp!) designed my daughter's board.

We talked about this year's Street League Skateboarding Championships that are taking place on Sunday at the Prudential Center in Newark, NJ.  She filled me in on the incedible event that's going to take place.  I wanted to write about it here, because I reeeally wish I could go.  I was hoping some of you readers would check it out and report back about how AWESOME it was!

Here are the details taken directly from Street League:

And here's the competition:

1. Paul Rodriguez – This young dad is on a contest hot streak including his first Street League win last month in Arizona and is a fan favorite to contend with Nyjah Huston.

3. Bastien Salabanzi – the only one of the 6 new pros to join Street League to make it to finals. Coming from France, with a close 2nd place finish at Stop 1, Bastien wants a win as much as anyone.

4. Chaz Ortiz - Coming fresh off the release of his amazing solo video part for Zoo York, and with a brand new private skatepark in his hometown of Chicago, Chaz is as on point on the board as he's ever been. Always nipping at the heels of the top spot. New Jersey could definitely be the time where he walks away with a win.

5. Chris Cole – Always giving the winners a run for their money with a mix of technical innovation, big tricks and some outside the box approach, this could be the time for Chris to get his first Street League win.

6. Ryan Sheckler – Always a crowd pleaser, Ryan goes big and is one of the most exciting skaters to watch. He had to place 3rd or higher in the last stop to make it into the Newark Championship and he did it. He always skates hard to the very end.

7. Luan Oliveira – This is Luan's first appearance in a Street League Championship event . He is fast and technical. Coming from Brazil, is one of the most technically skilled and consistent skaters in the Street League.

8. Sean Malto – Coming from Kansas City MO, Sean is the defending 2011 Street League Champion so you know he wants to take home another Championship win for the Red & Yellow.

So who do you think will win???  I'm making my pick right now - PAUL RODRIGUEZ will take it all.  Although I will  be rooting for everyone.

Get your tickets right now at www.streetleague.com/tickets.

Worthy Wednesdays: But, it’s not my cause…. | Finnegan & The Hughes

I grew up in a small suburban town.  I never had anything physically shocking happen to me outside of a few scraped knees from falling off my bike occasionally.  I have no speakable disabilities nor did I experience any type of abuse.  I was not a part of a TV movie about children in a cult.  I did not have ADHD.  When I got married, I wasn’t forced into it.  Everything bad that happened only happened in the movies – not to me.

This is a guest post I did regarding the statute of limitations for filing criminal charges against sexual abusers in NJ. Please check it out at finneganansthehughes.com Thanks!

Congratulations to Nichole on winning 4 tickets to the Land of Make Believe! Wahoo! 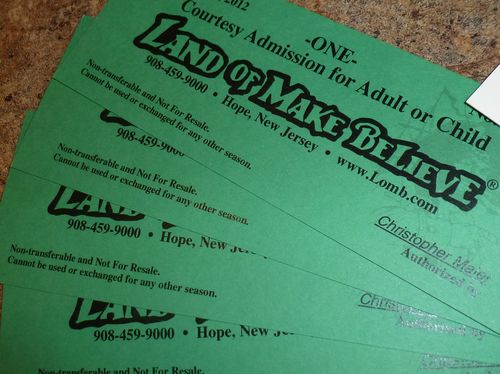 My mom won 4 tickets to the Land of Make Believe in Hope, NJ.  It is the most awesome place to take your youngens.  It has a water park and everything!  We were so excited to find out about the tickets, because we LOVE that place!

However, someone must have stolen some days when we were sleeping, because summer is almost over and we will not be able to make it there by the time the tickets expire on 9/9/2012.

My mom & I talked it over, and she said it would be AOK to post them on my blog to see if anyone would want them.  I thought it would be most fair to do it as a giveaway.

It will be a short giveaway ending on Monday 8/13 because I want to be sure you can use the tickets before they expire.

So go ahead and enter.  I hope you win!

*This is not a paid endorsement of Land of Make Believe.  My mom just doesn't want the tickets to go to waste. :-) 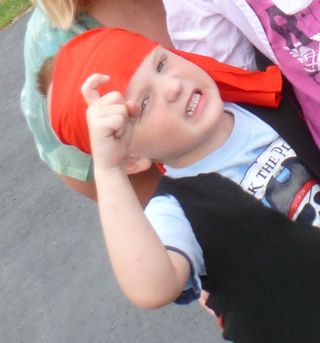 Every summer, my kids go on little adventures with my parents.  This year, my daughter got to visit Liberty Science Center for a day of experiments and learning - her complete cup of tea.  My son went for a ride on a pirate ship where he blasted some scurvy-riddled rival pirates with water cannons - HIS complete cup of tea.

As a little treat, I like to get them disposable cameras for these trips.  They can take pictures of whatever they want.  When they've reached the end of the film, we go to the store and have doubles printed up.   We then make photo albums: one to keep and one to send to Grandma & Grandpa as a thank you.

So this year, my daughter took her camera and used it right up.  She took pictures of the New York skyline and candids of my parents.  My son, on the other hand, had a few pictures left to take when he got home so we haven't developed his camera yet.

Last night as we were getting ready for bed, we were discussing the past few days.  I noticed that my son was holding his camera and didn't think much of it.  "So, what type of pictures are on there?"

"Well, there's some pictures of Grandma...some of Grandpa... some of the car..."  Nothing too exciting, but it doesn't matter.  Those pictures are a memory we like to keep.  It's a little tradition.

Then I heard Click!  "Mommy, I just took a picture of you!"

Oh, did I mention I had just gotten out of the shower and was standing naked in front of the mirror?

Time to start a new tradition.