When it all goes to poop 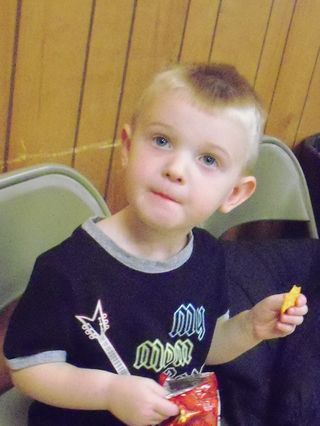 I grew up as one of two girl siblings in my family.  My sister and I weren't sterotypical girlie girls or anything, but we were girls.  For the most part, we didn't either break or fit any mold.  We were just people.  We liked both nail polish and playing manhunt in the back yard.  As a matter of fact, I don't think I ever really noticed the difference between boys and girls until I was in school and started chasing a boy named Anthony around the playground to kiss him.  Otherwise, the difference between boys and girls was just a matter of what type of bike you rode - you either had a bar across the frame, or you didn't.

My daughter came first.  While it was hard to get used to having a child, I didn't realize how EASY she was until my son came along.  Having a boy has opened my eyes to a whole different world.  He's a good kid and makes us all laugh every minute, but man...the POOP jokes!  Ever since he learned to talk, it's been about poop:

He likes me to check out the bowl when he's done to see the cool shapes he's made.

He likes to point out how certain things look like poop.

"Wow, doesn't the picture on that lady's shirt look like it has poop on it?"

"Mom, what are you making for dinner?  Cuz it smells like poop."

He uses it as a term of endearment.

He uses it when he's upset.

He compares every word to poop.

"Hey!  Ice pop sounds like ice poop!" - (I almost chimed in with a comment about poopsicles, but I decided I'd better not.)

He removes words from sentences and replaces them with poop - like the Smurfs do, only much less smurfy and much more brown and icky.

He laughs at himself saying the word poop.

Thank goodness he's the cutest thing alive.  I just want to hug the poop out of him. 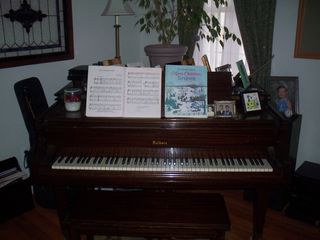 Going to my grandma's house was always a big ordeal to my sister and me when we were growing up.  She didn't live close by.  It would take up an entire day that could have been better spent wearing our play clothes, getting dirty and smiling.  We had to be proper at Grandma's.  We had to be ladies.  We ate cream of pumpkin soup and roasted lamb with mint jelly.  We used the correct fork and didn't put our elbows on the table.  We did NOT ask for seconds during dessert.  We did NOT ask to be excused until everyone was finished eating.

We wore our Sunday best to Grandma's because we thought she expected it.  We treated those visits as pure torture.  Don't get me wrong, looking back at those days I can see our error.  But we were kids...we didn't want to sit in the parlor drinking tea.  We wanted to be outside exploring the possibility of fairy houses and mud pie eating contests.

The one thing that kept the visits bearable was a beautiful baby grand piano that my grandfather bought as a gift to Grandma before my dad was born.  We would sit there on the bench pretending to know what we were doing.  I'd hit two low keys back and forth imagining Cinderella running down the castle steps as the clock struck midnight.  We'd  look through the piano books and find 'On Top of Spaghetti' and sing at the top of our lungs.  We'd open the piano bench and find tuning forks and pitch pipes and more books with foreign musical languages in them.

Once we found a book that had the song 'Yesterday' by the Beatles in it.  Immediately, we were drawn to it; wondering why our proper grandma had a book with a song by a rock band in it.  It was mesmerizing.

When my sister and I became adults, my grandmother aged along with us.  My grandfather had passed away long before and she had lived alone for most of my life.   But as time went on, it was becoming apparent that moving in with my parents would be a good idea.  We all wondered how it would be, considering we always were so proper during visits with Grandma.  She would see how we (gasp!) really live.

It was undoubtedly uncomfortable for a little while.  Not just for us, but for my grandma, too.  She was so used to having such privacy at all times.  At my parents' house, she was constantly in the company of another person.  At the time, my sister's first child was toddling around doing normal kid stuff.  We tried to get her to understand that Grandma was her great grandma, but that quickly translated to my niece calling her Big Grandma.  When Grandma seemed OK with it, that was the first time I realized how wrong I was about her my whole life.  She started watching Spongebob Squarepants with my niece and nephew.  She said "yeah" instead of "yes".  She wore pants.

She had always been an enigma to me up until she lived with my parents.  I was always afraid to be myself around her.  I honestly don't know why.  When I would visit her at my parent's house, we had the most wonderful talks about marriage and God and the world... she loved me so much more than I ever understood as a child.  We just didn't know how to communicate it well when we were both younger.  As we both moved on to different parts of our lives, she became more like me and I became more like her.  She let go of a lot of mannerisms that she held onto, and I snatched them up to keep for myself.  Yin and yang, I suppose.

My grandma passed away 5 years ago and I miss her every day.  The things she taught me have stuck.  When my kids slop around their dinner plates with their napkins on the floor, I think of Big Grandma.  I explain to the kids how to properly cut their steak and where to put the knife when they're done.

And I play her piano that now sits in my front room.  She gave it to me at one of my biggest turning points in life.  My husband had just asked me to marry him, and we had bought a house - far away from my family.  I was scared and nervous, even though I didn't mention it.  That piano soothed me then, as it does now.  I'm not a piano player.  I took lessons as a child, but never became good at it.  I just like to sit there and play the three songs I know...re-thinking all the time I spent at Grandma's house.  Wishing it all back again.

Just a couple reminders as to why your life is good 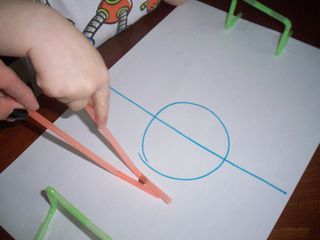 1. You have the abililty to make a hockey game out of paper and straws.

2. You can navigate away from this blog and find knowledge and beautiful pictures of ANYthing you want to learn about or see right here online.

3. Just think about a little kid doing a belly laugh.  Or eating something crunchy.  Try not to smile.

4. It's almost Spring which means it's park season.  No more spending money at indoor places to keep the kids busy.  They can run outside in the FREE air!!!  *Bonus*- They might start taking naps again.

5. If when you're doing laundry, you notice that the clothes you're putting into the washer still smell pretty good...you're pretty blessed.

6. You might be the person who figures out why yawns really are contagious.  Think about that!

7. Someone loves you.  You probably already know that, but in case you didn't - there it is.

8. If you really want to, you can do anything you want today.  You really can.  Don't think you can't.

9. Your kid might be the one to change the world for the better one day.  In fact, he or she might already be doing it RIGHT NOW.

10.  Going to the movies still exists and the popcorn is fantastic.

11.  You have the ability to make people smile.  Doing something goofy or just smiling yourself will do the trick.  Make sure you laugh at yourself, too.

12.  EVERYTHING is funny.  It might be hard to see sometimes, but find the humor in everything you see or do.  It will make your good life even better.

13. We didn't get burned up yesterday from the solar flare everyone was talking about.

I hope everyone has a wonderful weekend.  And in case you're curious, I'm one of the ones that loves you. :-)

The longest shortest week ever 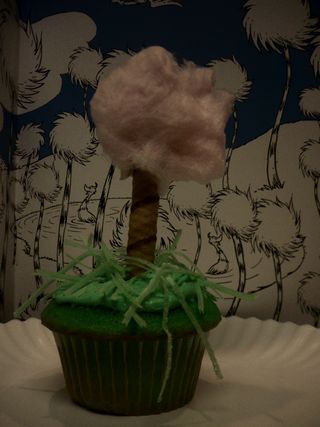 It's been one of those I-can't-believe-it's-only-Tuesday kinda weeks.  But at the same time, I can't believe it's already Friday.  Isn't it funny how time can feel like it drags on endlessly, but then you can't seem to find it?  I swear I was just sitting here trying to figure out what snacks we have for the kids' lunches this week, and now it's over.  I'm a little worried, because I don't remember a lot of it.  Sometimes, it gets so busy that I just go through the motions until there is nothing left on the schedule.  Then I sit down and usually fall asleep before whatever show we're watching is over.

Looking at the calendar of this past week, it was jam packed with TONS of really exciting stuff.  Sunday we had dinner to celebrate my father-in-law's birthday.  Monday I found out I'd be doing my first real interview with a real person in real life and basically drove myself batty reasearching him.  Tuesday I celebrated my friend's birthday with her in Atlantic City, came home to interview the real person, then went back to my friend's house to witness a singing chicken telegram that her mom got for her.   Wednesday I worked on the story that was to accompany the interview.  Thursday I cut out 25 Lorax mustaches and made 40 cupcakes that looked like Truffula trees and Things 1 & 2.

Even writing that was hard.  All because I can't remember it.  I rushed through all those things without stopping to see how wonderful it all is.  I made it into 'work'.  Making dinner, packing lunches, getting the kids ready for bed - that's supposed to be the work.  Those exciting things were supposed to be the extras.  The fun stuff.

Thank goodness today is Dr. Seuss's birthday.  Time to stop.  Time to reflect on the greatness of being able to DO all these things.  Time to cut loose and be a little a lottle Seussical.

I made my kids green eggs and ham today.  My daughter dressed up like the Cat in the Hat for school.  I revisited the cupcakes I made yesterday and made them SHINE.   I went overboard when I didn't have to -  I needed to.  I needed to see my kids smile because of something I wanted to do for them.

Now I can sit here and think back to this crazy week - singing chicken and all - and know how blessed I am for all the good things in my life.  And how absolutely fun it all is.